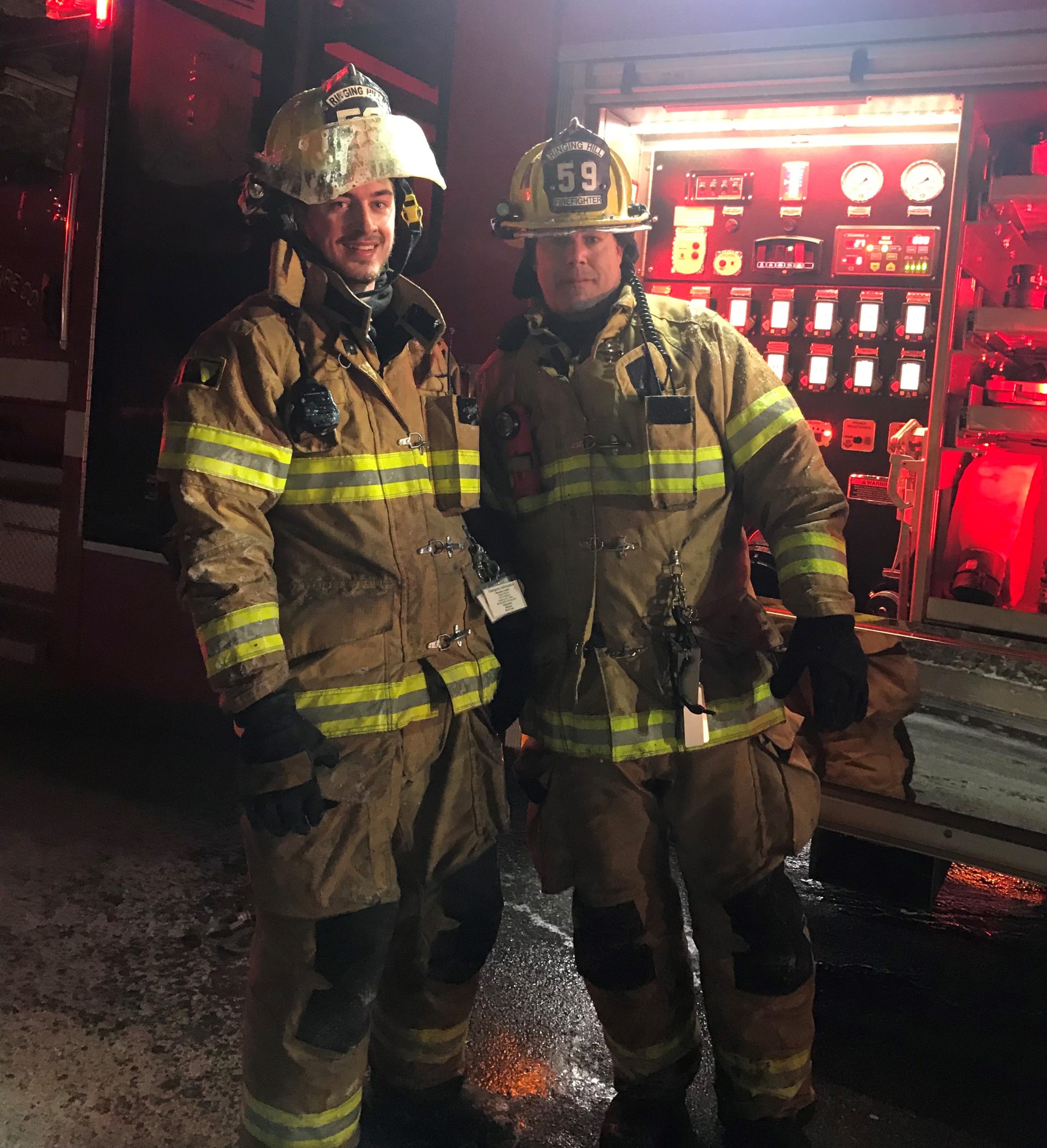 Sons often follow in their father’s footsteps when it comes to volunteer firefighting, but for Greg Delp and his son, Bryan Delp, it was the other way around. Bryan joined Ringing Hill Fire Company first and his dad, Greg, later followed suit.

Bryan joined Ringing Hill in 2013, right before his 17th birthday. He was the first junior firefighter that Ringing Hill ever had. Being under 18, his only restriction was that he could not enter burning buildings. Bryan could still assist at the scene of emergency calls and participate in drills, so he helped out wherever he could.

“Growing up so close to the station, I would always hear the sirens and see the trucks go by,” said Bryan, who also played baseball on the field by the station. “I was looking for a way to give back to the community I grew up in and volunteering seemed like the obvious way.”

Bryan’s parents were supportive of his decision, but like all parents, had some concerns. His mom, Jen, worried about his safety while his dad, Greg, worried about his ability to balance volunteering, school work and sports. Bryan made it work though and loved his time spent at the station. Soon, Greg wanted to join Ringing Hill Fire Company too.

“I think firefighting was something my dad was always interested in and once he saw me love it, it really gave him the push to go through with it,” said Bryan, who jokes that when his dad first joined, he treated him like the “new guy.”

Greg and Bryan both have strong desires to help people and turn someone’s worst day into a better one. “It’s been very rewarding and I wish I would have gotten involved much sooner,” said Greg.

“My dad is definitely one of the most selfless people I know,” said Bryan. He and his dad have always had a very close relationship and Greg was his baseball coach growing up too. “It was very cool to take that relationship to Ringing Hill,” adds Bryan.

Because they are so close, they worked well together at fires and emergency scenes, and are good at knowing what the other is thinking. A fire call that is memorable to both of them took place a few years ago when they were dispatched to Upper Pottsgrove Township to assist with a house fire. It was winter and Bryan already went on a call during the day. His gear was still damp from snow, but when he got the call at night, he geared up and went out with his dad.

“It was about 10 degrees out and we were both on the back side of the house when we got hit with foam,” said Greg. “It was so cold that the foam instantly froze to our gear.”

The road was also like a sheet of ice, which made everything more difficult, and Bryan recalls slipping and sliding until the fire was out and it was safe to go home.

As a firefighter with Ringing Hill, volunteers respond to fires, motor vehicle accidents and off-road calls with state-of-the-art equipment. However, the job goes far beyond firefighting.

“Most of what we do is community relations. It’s not all about putting out fires,” said Greg. “We do so much more, from helping Santa get around the township at Christmas, to most recently, the birthday runs while everything was shut down due to the pandemic.”

Greg has three other children and his daughter, Rebecca, also joined Ringing Hill this year as an auxiliary member, helping with the Santa Run and Easter egg fundraiser.

Ringing Hill volunteers are only asked to give as much time as they can and are not expected to respond to every call or help with every fundraiser. Bryan is only home a few times a year since graduating from the United States Coast Guard Academy in May 2019. He is currently the Weapons Officer and Assistant Operations Officer onboard the Coast Guard Cutter Legare, stationed in Portsmouth, Va.

Bryan said his training with Ringing Hill helped prepare him for the Coast Guard. “Emergency scenes are a high-stress environment and I learned to make decisions quickly. It prepared me for my current role to work a high-risk, high-intensity job,” said Bryan.

When Bryan does come home, he wears his radio for calls. “I’m welcomed back to the station like I never left,” he said.

Greg is able to volunteer with Ringing Hill on a more regular basis and is thankful to successfully balance being a father and husband with working and firefighting. “It’s actually been relatively easy thanks to my family and my wife, Jen, who could not be more supportive,” said Greg. “I’ve never received any grief for leaving to go on a call, go to meetings or just go up to hang out. After 26 years, she enjoys getting me out of the house once and a while.”

Greg also serves as Ringing Hill’s secretary of the Board of Directors and treasurer of the Firemen’s Relief. Plus he is a member of Goodwill Fire Company in Pottstown.

While volunteering does not provide financial compensation, the training, equipment and gear are all provided for free, and what volunteers gain from the experience is invaluable.

“People always look at me weird when I tell them that running with Ringing Hill is my stress relief,” said Greg. “I work in the construction industry, so almost every day is a grind.  When I am up at the firehouse hanging out with the guys, I can forget about my work day real quick.”

Ringing Hill has a family-like atmosphere with a diverse group of people. Bryan didn’t know what to expect when he joined Ringing Hill, but was blown away by the group of people. Despite everyone coming from all different walks of life, everyone works together so well and all get along. He and Greg both made many friendships at the station.

“I have met many people and made many new friendships that I never would have met had it not been for the fire service,” said Greg.

“There are plenty of ways for dads, their sons and their daughters to volunteer together and bond at the fire company,” said Derek Dry, Assistant Chief, and Recruitment and Retention Committee Chair.

Additionally, many teens have joined the station since Bryan became their first junior firefighter seven years ago and he encourages more teens to join.

“Volunteering will help them mature and gain professional development,” said Bryan. “It’s a lot of fun and a great way to stay busy besides going to school and work.”